I had kind of weird situation few days ago, when Teams meeting add-in in Outlook just disappeared for no visible reason. Not having that add-in in Outlook actually prevents you from scheduling Teams meeting from Outlook, which not a nice situation. You surely can do it directly from Teams calendar, but that might not be so convenient for several reasons. I first tried some common and known troubleshooting steps. I restarted Teams app, as well as Outlook, tried to reinstall Teams, but nothing helped. The only option was to reinstall Office apps, but I was not in the mood for that for several reasons, so I decided to dig deeper into this issue. On another computer, where Teams meeting add-in was present and working, I opened Outlook, switch to Options and opened Add-ins console. There, I was able to locate Teams meeting files location, like you can see on the following screenshot: 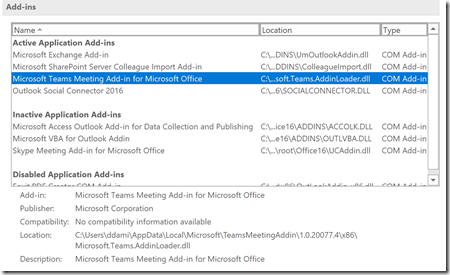 When you browse to the folder where Teams meeting add-in is located you can find install log file. It is called meeting-addin-install-logs. When you open it, you can see what was going on with this add-in. However, you can also find a command that is being executed for Teams add-in installation.