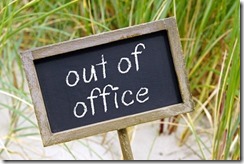 One of the most common things that almost everyone does is to set out of office (aka. OOF – if you want to know why it is not OOO, see here) message to his/her mailbox account, when leaving the office or workplace for some time.
Some people do it when they plan to be absent for few days or more, some do it even when they are not there for a half of day. And while some try to provide genuine messages with more or less sense of humor (yes, I mean these 404-like messages), most of these messages are typical in a way that 90% of them contain a phrase “limited email or Internet access”. This is mostly used as an excuse for not replying as fast as usual. These days, while I’m on a mini vacation (and out of office), I’m thinking about does this really make sense anymore. Are we really having limited Internet access while we are out of office? Or we have even more Internet access than we usually consume, while on regular activities in the office? It is enough to look people around you, and the answer is pretty clear – being out office, on a vacation or a business trip, actually does not limit our Internet or email access. On the contrary, we mostly doing everything we can to have the Internet access most of the time. Today, it is almost impossible to find a café, restaurant or hotel without Internet access for guests. Some of these facilities care more about their WiFi quality than about their toilets. If you are attending a conference or some business event – free Internet access is mandatory. Yes, sometimes it does not work so fast, and you might not be able to watch HD Youtube videos, but we are talking about email here. You’re not taking your laptop with you? Even if that’s true (which I doubt) how many emails you actually read on your laptop today, not to mention old fashioned desktops? Speaking for myself, I read at least half of my emails on my phone. I also respond to many of them from my phone – when I realized that, I decided that I need a phone with bigger screen.

So, it’s not about being limited with Internet access (and you know it J). Is it about time that we have to answer emails while out of office? Not for me. If I’m on a business trip, I usually have more time for emails than when I’m at my office. My usual working day is full of meetings, and very often, I don’t even open my laptop before afternoon, not mention evenings when I spend time with my family. Actually, when I’m out of office for some business trip, I have more time to read and respond to emails (and I do get a lot of them). I know quite a few people that are faster to respond on email while they are out of office than when they are in the office (whatever that means). Because of this, I’m seriously thinking to start using In-the-office automatic reply for myself. I just need some time to figure out some genuine message that will not make people think I’m crazy.

On vacation, I read emails at least once a day. It is my choice, not saying it’s a right thing to do. It is just that I’ve realized that this is less stressful thing to do, than to have 1000+ unread emails when I’m back. I fully respect those who like to disconnect from email, it just does not work for me.

If it is not about time, and definitely not about having limited Internet access, is it about our willingness to respond to email while out of office? I think it is. Having OOF message on your mailbox is actually a nice way to say “Yes, I’ve probably red your email in about 15 minutes after you sent it, but will not respond for some time because I’m out of office”. If it is an email that requires some action from you, this kind of excuse worth even more J. And because you’re out of office, most people will restrain from calling you on the phone (personally, I dislike phone calls most of the time).
Let me know what you think, in your comments.

These days I’m using Office365 Delve more and more. What really looks very interesting there is My Analytics part. If you didn’t try it so far, and you’re using Office365, I strongly recommend that you do. Among other things, Delve will actually tell you how do you manage your time and especially how you manage your emails. You might be surprised when you look at it. And maybe you realize that you need in-the-office automatic replies more than you think.